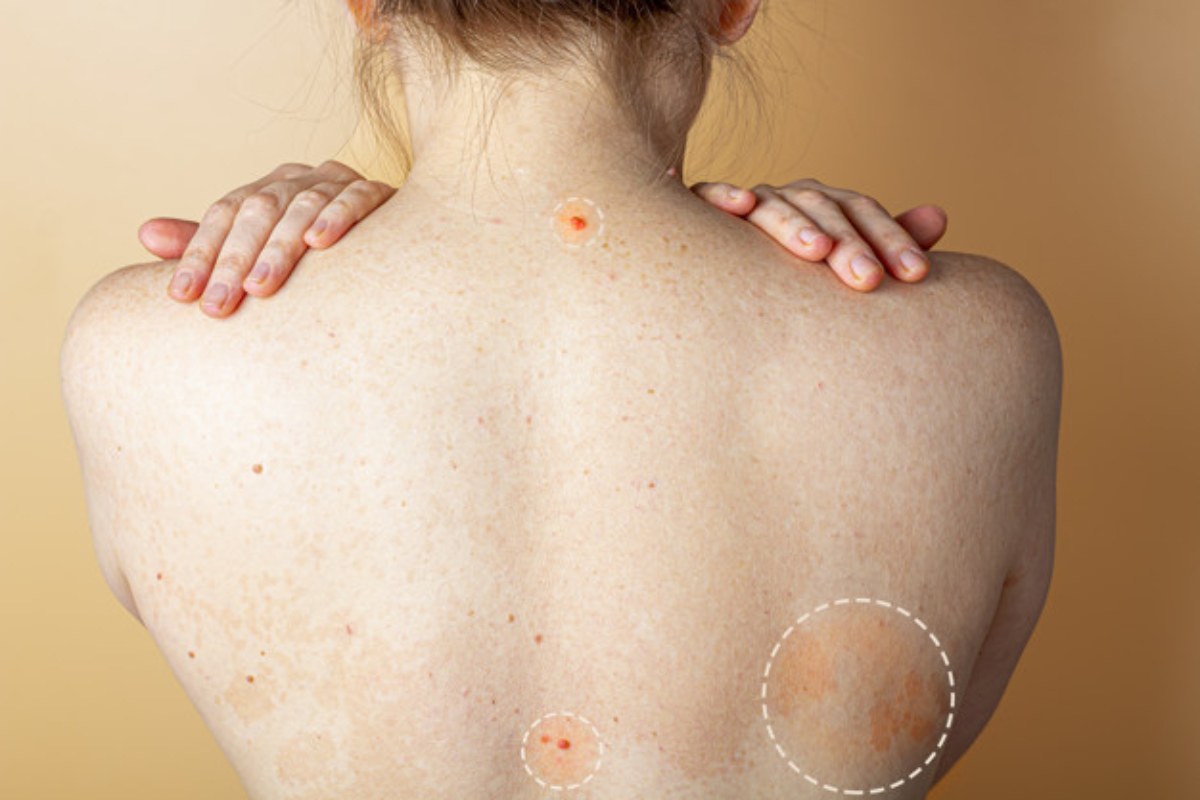 Skin Lesions: Tanning and unifying the skin is a fashion that is relevant every summer. Rising temperatures and a visit to the beach are an excellent opportunity to sunbathe a bit more. However, some do not take into account the risks of skin damage from the sun’s rays.

Exposure to direct UV rays for too long can have serious consequences. In fact, in addition to the usual burns, allergic reactions and even cancer can occur. Do you want to know more about that?

What Is Solar Radiation?

First, it is convenient to define what solar radiation is. It consists of invisible and visible radiation. Ultraviolet B (UVB) (UVA) rays and invisible light rays and generators are the majority of skin conditions.

According to a scientific article, UVB radiation is the main cause of harmful effects, while UVA contributes only 10% to 20%. When outdoor activities are more active in the summer, these rays become more aggressive and carry serious risks.

Skin damage caused by sun exposure is the result of improper tanning or any other outdoor activity. Refusing to use sunscreen and other preventive measures leads to overly severe skin attacks. We will describe them in detail below. 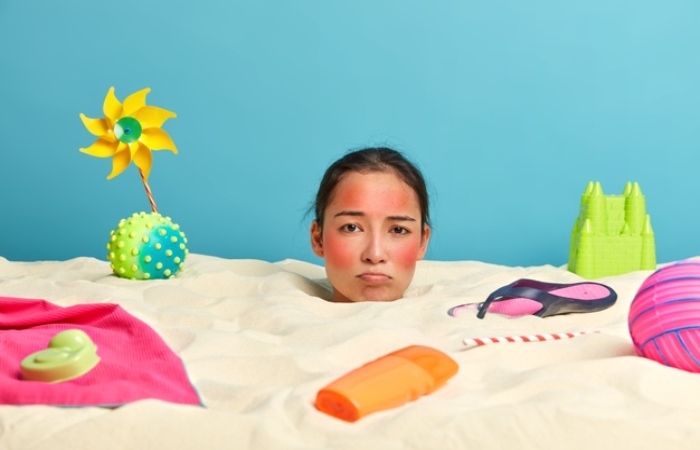 Sunburns are caused by ultraviolet B radiation. They occur anywhere on the body that is exposed (scalp lobes and earmuffs). Some of the symptoms and signs of burns are as follows:

In severe cases, headache, nausea, fatigue, and fever.
These signs and symptoms usually appear several hours after sun exposure. After a few days, the peeling process begins on the skin, which leads to its healing.

Damage that accumulates in the skin over the years can lead to premature tissue destruction or photoaging. The Journal of the American Academy of Dermatology conducted a study in which it was found that those areas of the body that were most susceptible to photo-exposure were 20 years ahead of ageing signs.

In particular, it increases the presence of actinic keratoses, wrinkles, and acne. A study published in the journal Clinical Cosmetic and Research Dermatology concludes that the sun is the generator of 80% of these manifestations on the skin.

Exposure to the sun causes injury and ageing and increases the risk of further skin damage. More precisely, UV rays are positioned as the main risk factor for developing malignant neoplasms of the skin.

Its estimates that about 90% of skin carcinomas occur in exposed areas such as the face, ears, neck, forearms, and hands. How can this disease occur? There are several ways. 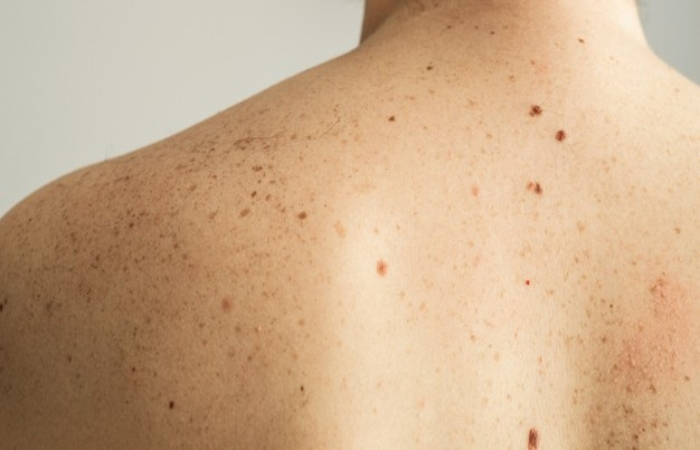 Excessive, accidental, and intermittent sun exposure has links to melanoma development, as detailed in an International Journal of Cancer article. It tends to develop more often in people with fair eyes and skin who suffered from sunburns during adolescence or childhood.

Although it is the least common type of skin cancer, the number of cases has increased in recent years. The average age at diagnosis is 57 years, with 75% of cases under 70 years.

In squamous cell carcinoma (SCC), the cells affected are the most superficial epidermis, called spiny cells. They represent 20% of cutaneous carcinomas. The Skin Cancer Foundation reports that those who use tanning beds are at 2.5 times the risk of developing it.

The cells involved in basal cell carcinoma (BCC) found in the epidermis basal layer and are responsible for skin renewal. These are the most common skin tumours and represent 80% of the total. 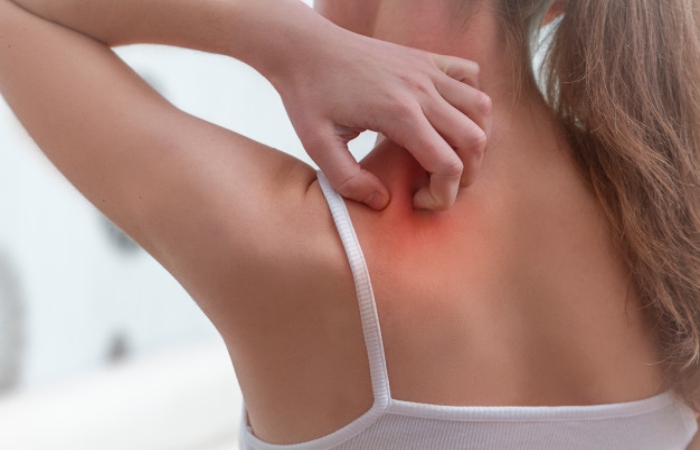 Some people can develop an allergic condition due to sun exposure. Mild cases go away on their own without the need for treatment. Regardless, it can happen to a severe degree, leading to treatment with corticosteroid pills or topical medications.

Also called solar keratoses, they are precancerous lesions that grow slowly but steadily. They appear for the first time after 40 years in areas that have exposed to the sun for a long time. Most of the time, it is located on the ears, the scalp, and the face.

They are thick, scaly leaves that are rough to the touch and can alternate between brown, red, or pink. Sometimes their diagnosis delays because they are mistaken for common warts.

It Is Possible To Avoid Skin Lesions From Sun Exposure

Preventive measures are the best way to avoid the effects of sun exposure. In this sense, it recommended using sunscreen with an SPF of at least 50 protective clothing such as long-sleeved shirts, long pants, and wide-brimmed hats.

Likewise, it is advisable to visit a dermatologist regularly, especially if there are abnormalities in the skin, such as a new spot or a strange nevus. Early detection of rashes contributes to the success of treatment.

In addition, you can find more helpful resources at Thewebscience.

Keys To Protecting Yourself From UV Rays

The Importance Of A Healthy Breakfast To Start A Day

Atopic Dermatitis: Take Care Of Your Skin From It

7 Tips To Remove Makeup Well In A Short Time